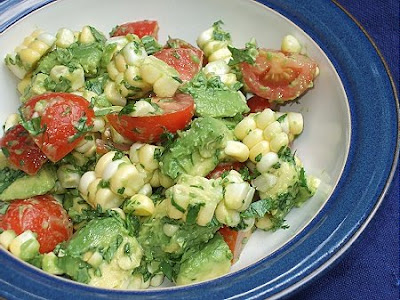 (Recipe and Picture from Dara: Chick in the Kitchen)

I use raw sweet corn for this recipe, which in season (right now! go get some) is just divine. You just stand the cob up on end, and use a large chef’s knife to pare the kernels away from the cob. Make sure you do this inside the dish you’re going to use for the rest of the recipe, so that any liquid released by cutting the corn winds up in your food, not on your cutting board. I’m a tiny bit obsessed with the crunchy texture of the raw corn, especially the way 4 or 5 kernels will hold together off the cob, uniting to create a big chunk of summer goodness.

I use two ears of corn; two avocados, in bite-sized chunks; a half pint of grape tomatoes, halved; the juice of one lemon; and a large handful of cilantro, chopped (you can substitute basil). Mix them all together and serve at room temperature or straight from the fridge.